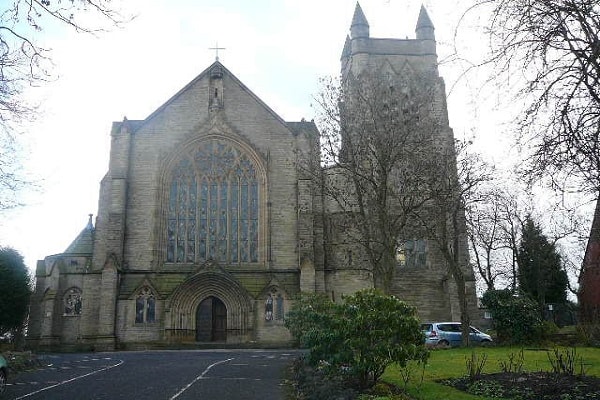 St Alban's parish was founded in  1773 by Bishop Petre and Father William Fisher and nourished by the blood of our Martyrs and the prayers and sufferings of our forefathers, the Faith has put down deep roots in East Lancashire.

In 1773 just two baptisms were entered in the register but by 1780, Bishop Matthew Gibson confirmed 31 parishoners at Blackburn and 110 communicants recorded. It has been estimated that there were 745 Catholics in Blackburn in 1805.

The population of Blackburn continued to grow and between 1801 and 1821, the census confirmed it had almost doubled from 11,980 to 21,940.  A similar increase in the Catholic community, no doubt assisted by the Irish immigration, meant that the little St Alban's chapel in Chapel Street needed to be replaced by a larger church on a new site – Larkhill.

The building of the new church began in 1824 and unlike the previous chapels was not hidden by other buildings.

Blackburn Catholics were no longer afraid to pin their hearts on their sleeves and this was demonstrated on the Feast of St Alban on 21st June 1826 when the opening of the new church was advertised in the "Blackburn Mail".