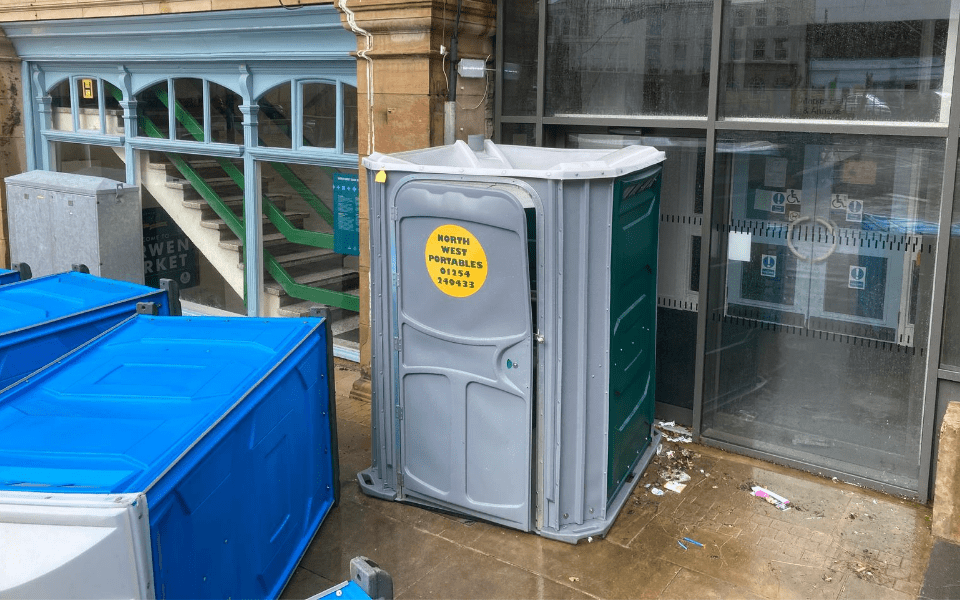 Blackburn with Darwen Council has been forced to remove five portable toilets from Darwen town centre after they were repeatedly vandalised by youths.

The toilets were put in place as part of measures to re-open the market following the Coronavirus lockdown.

They were deemed a safer option for residents – with the existing toilets only having narrow entrance and exit points.

However, the outdoor toilets have been repeatedly damaged by youths who would set them on fire, push them over, stamp on them and remove the locks so they could be used for anti-social behaviour.

We have been left with no option, but to remove the toilets.

It is a crying shame as they have been an asset for many, but the vandalism has been persistent and prolonged.

We carefully considered all of the options for toilets as part of the steps we needed to take to be able to safely re-open the market.

The number one priority is of course keeping our residents, the market traders and their customers safe and similar schemes have been introduced across the country and have worked really well.

It’s really disappointing that this has happened in Darwen.

In February, Lancashire Police issued a 48 hour dispersal order for the town centre to crackdown on an escalation in anti-social behaviour.

Services from right across the Council have been working hard with the Police to support their efforts, but there has once again been a spike in recent weeks.

We are working with the Police and doing everything we can to tackle this issue.

We cannot allow groups of youngsters to be causing damage to this extent and being left unchallenged.

However, now more than ever though we need the support of the parents and carers of these youngsters.

Aside from the damage they’re causing to the town centre, the latest data shows us that Coronavirus is more prevalent in the under 30s.

These youngsters should not be out mixing in large groups putting their family and friends at risk.

Of course there’s also the impact on our town centre businesses – who are struggling as a result of the pandemic.

The market toilets have now been re-opened with a one-in-one-out system in place.

As the dust settles and we emerge blinking into the dawn of a new year, the men and women of this great country will need answers.
The post Advice for the People from the Pub Landlord – Coming to Blackburn appeared first on Blackburn Life. Blackburn Life …